👾🔐Tron is close to big developments, but will they affect the price? Check out our analysis and forecast for the rest of 2019📈🔬

At first glance, the Tron cryptocurrency does not have the task of changing the world we know. However, the idea of ​​TRX has enough interest to be alive – creating a decentralized environment where users can create and host entertainment content. And it seems like the concept sounds twofold, but Tron has been living and developing for almost two years. And what does crypto expect next? We will see!

The main coin of Tron – TRX, the total issue of which is 100 billion coins. Currently, the altcoin’s capitalization is $ 2.2 billion. With this indicator, Tron ranks 12th in the crypto market. Further tokens will not be released, one and most of the existing tokens are in the hands of Tron developers. This fact raises some doubts among the ranks of crypto holders. However, Tron has qualitative differences to many cryptocurrencies:

We should pay special attention to the last character. Justin Sun is Tron’s founder and a key figure in the crypto investing world. It is impossible not to notice the marketing ability of Sun, which is cleverly promoting Tron in every imaginable and unthinkable way. We will talk about this separately.

In general, investing in Tron seems like a promising path today. Take into account historical price changes, analysis, and the impact of other sources on the TRX rate.

Analyzing and forecasting the TRX price should start with a look at the historical data. Tron is a relatively young cryptocurrency that was created in late 2017. The network itself was only started in mid-2018. The Tron price in the background of all events changed as follows:

Today, after two phases of growth, Tron is trading in the region of $ 0.033 for a TRX token. The growth of an investing crypto-asset cannot be called explosive, but a positive movement can be observed.

In Tron’s case, the most important thing is to play the message background. Justin Sun tries in every way to create a hype around his idea. One of those steps is to acquire the right to dine with investment legend Warren Buffett. Sun gave $ 4.5 million for the opportunity. Even this news increased the price of his crypto.

The SUN network, which is already being actively reported in many sources, is to be launched later in the summer of 2019. Also worth mentioning is one of the latest popular news from Tron. TRX will be the official cryptocurrency to be paid for at IEOs on the Latoken platform, which should have a qualitative impact on liquidity and the Tron price.

Tron analysis and forecast by experts

Tron, like many altcoins, is not particularly popular with experts. Forecasting and analytics collect hundreds, but not thousands, of views. However, almost every day you can find interesting thoughts and predictions about the future of Tron. Here are a few of them.

User Cryptotrader_123 believes the TRX chart is bullish and predicts explosive growth after the pattern is completed. In line with the trend, growth will continue, but a correction is possible in the near future. Step by step, however, Tron will take over its own. 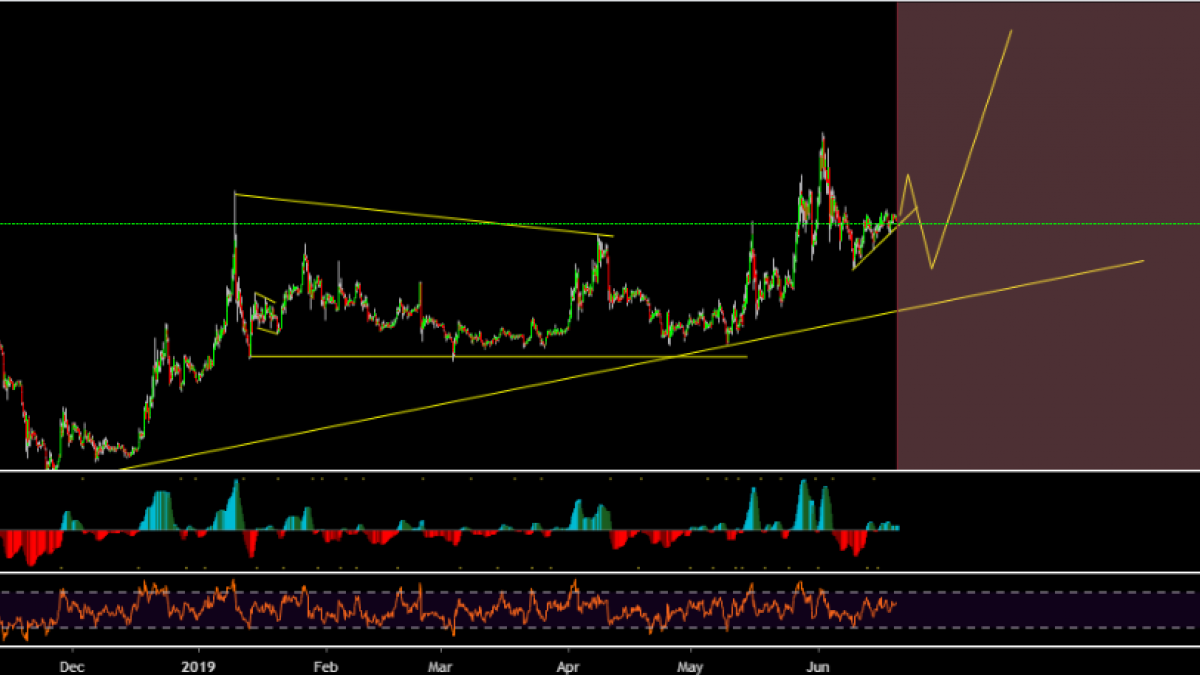 According to user the_booty’s analysis, investing in Tron in marked areas can be good. The user recommends opening long positions and keeping the crypto. On a larger scale, he predicts an increase in the price of Tron, but important levels are also noted in the situation with a decline. 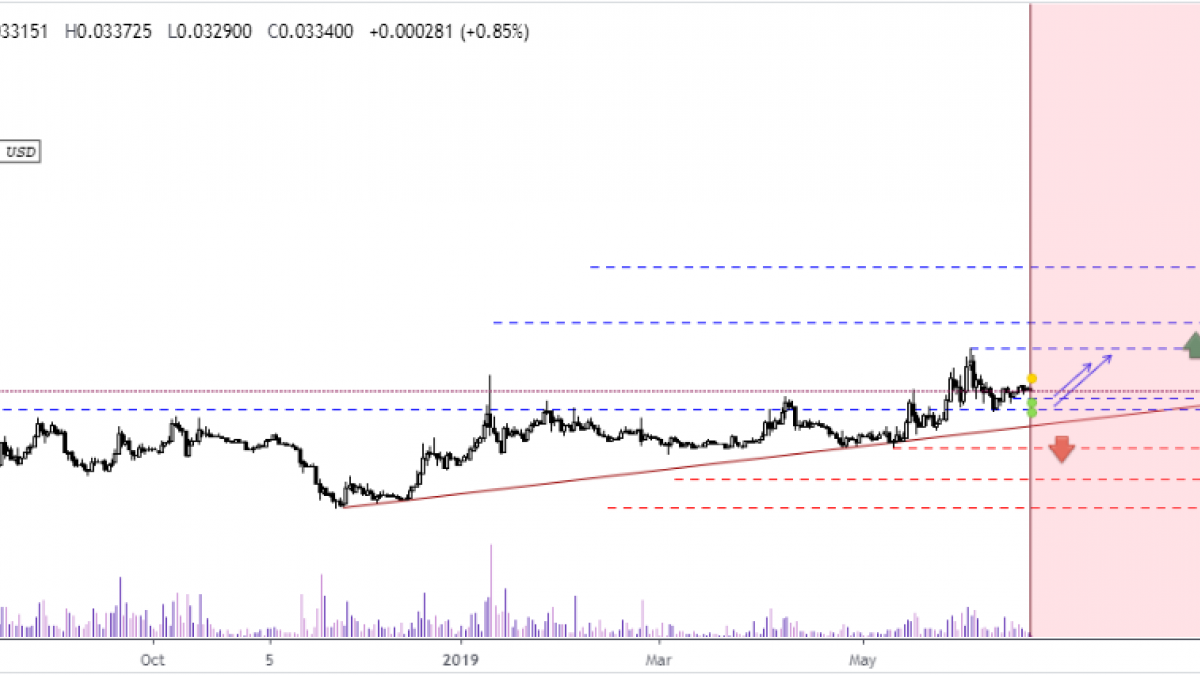 User SajjadMazroei based his analysis on triangles. In his opinion, a smaller one appears in a larger one. He predicts such developments in the coming months: 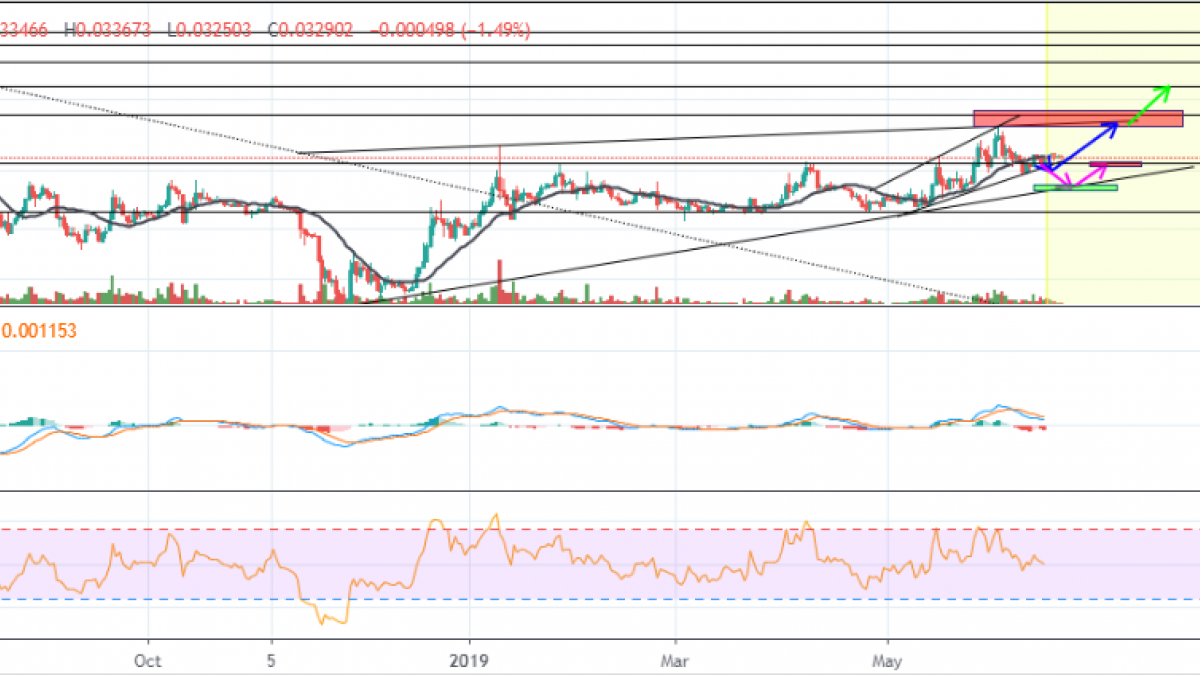 We remind you that these are just opinions and you need to understand everything for yourself.

We have our own thoughts and predictions about the price of Tron for the second half of 2019. The technical characteristics of Tron are quite controversial. Oscillator analysis shows the need to sell existing assets while moving averages indicate a strong buy. We believe the truth is somewhere in between. Both price reduction and growth are possible. 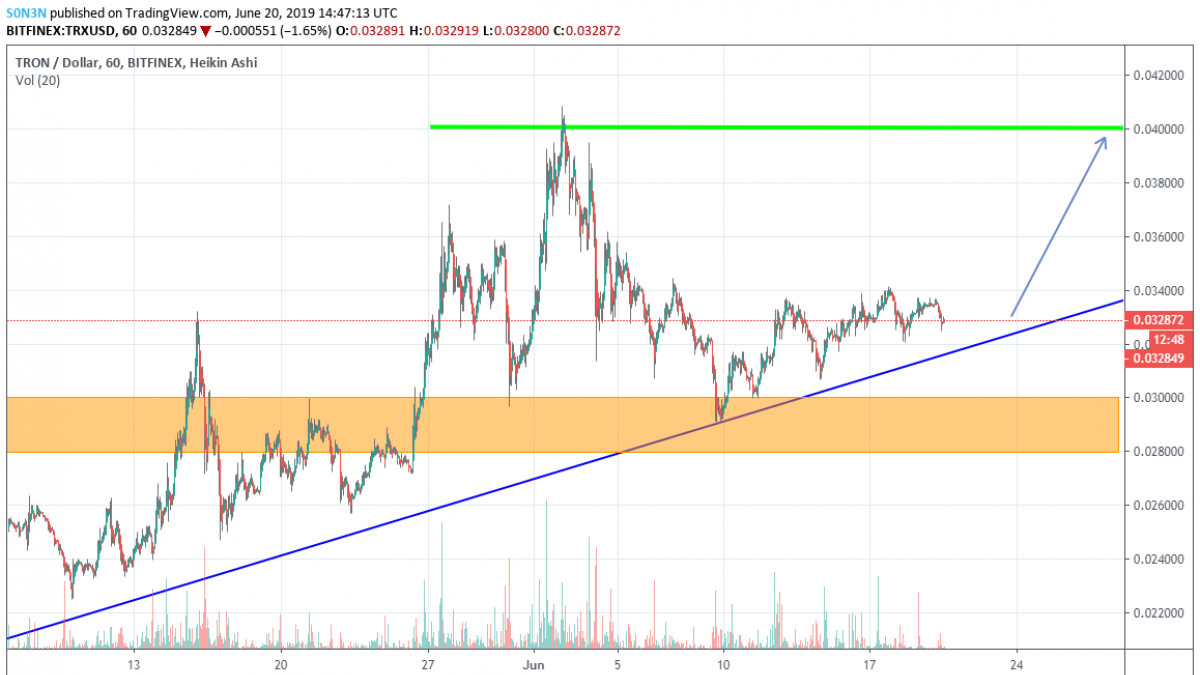 We anticipate that the deciding factor will be the full launch of SUN Network, which is scheduled for August 10th. The upgrade includes solving many problems with the scalability, bandwidth and protection level of dApps.

Analysis of the trendline shows that it is rising, so you shouldn’t expect a noticeable drop in the price of Tron. Before SUN Network launches, the price is unlikely to cross the $ 0.04 mark, but it’s not worth waiting for a drop below the $ 0.029 mark.

All of the dramatic changes are caused by the movement of bitcoin and sentiment in the crypto market. Tron is no exception, it also depends on the movements of BTC like any other altcoin. With a positive scenario, it can be predicted that the TRX price will reach $ 0.05 by the end of 2019. Growth beyond this mark is possible, but unlikely. It is unlikely that the bottom price will be below $ 0.022, i.e. in the worst case it will revert to 2018 levels.

As a crypto investing asset, Tron looks pretty promising. The chances of losing money by investing are insignificant, but the altcoin may not bring much profit. We hope that our forecast will help you make the right decision. Last piece of advice – follow the Tron news as this is the most important factor.

The inventor of BitTorrent leaves after taking on TRON