Cardano (ADA) is rebounding from a 30% decline from the all-time high of Feb.27. The coin started March with strong momentum and some signs of full recovery.

ADA is currently trading at $ 1.12 against the US dollar. The cops are persistent in getting the coin back on track. And the market should expect to hit $ 2 at any time.

In fact, the hard fork has seen that the digital asset has fallen from 3rd to 4th in the top 10 leading cryptocurrencies. Cardano has been replaced by Tether (USDT); However, if the $ 2 goal is to be met, ADA will regain its fame in mid-March.

The bears are pulling back strongly against the coin and increasing selling pressure. Cardano fell over 10.14% between yesterday and today. It turns out that the decline following the gradual rise of the coin in February signals bearish weakness. The bearish patterns could also be sales after ADA’s remarkable all-time high hit early last week.

Prior to the news of the last hard fork, Cardano was priced between $ 1.24 and $ 1.34. The announcement dragged the price down towards $ 1.2. A pullback could result in further breaks below the USD 1.01 support base.

ADA / USD price movement over the past 24 hours

The 12 hour chart contains a TD sequence indicator which suggests that Cardano (ADA) may have a bullish tipping point in the short term. This is also an indication of a “buy signal” despite the prevailing selling pressure in the altcoin markets. At press time, the ADA / USD price is $ 1.12. The coin has lost 7.07% on the daily chart. The bulls should stay intact around current support to maintain upward momentum or prevent further declines. The bulls are set to defend the $ 1.01 support level and reset the coin against the two major resistance levels of $ 1.26 and $ 1.32. 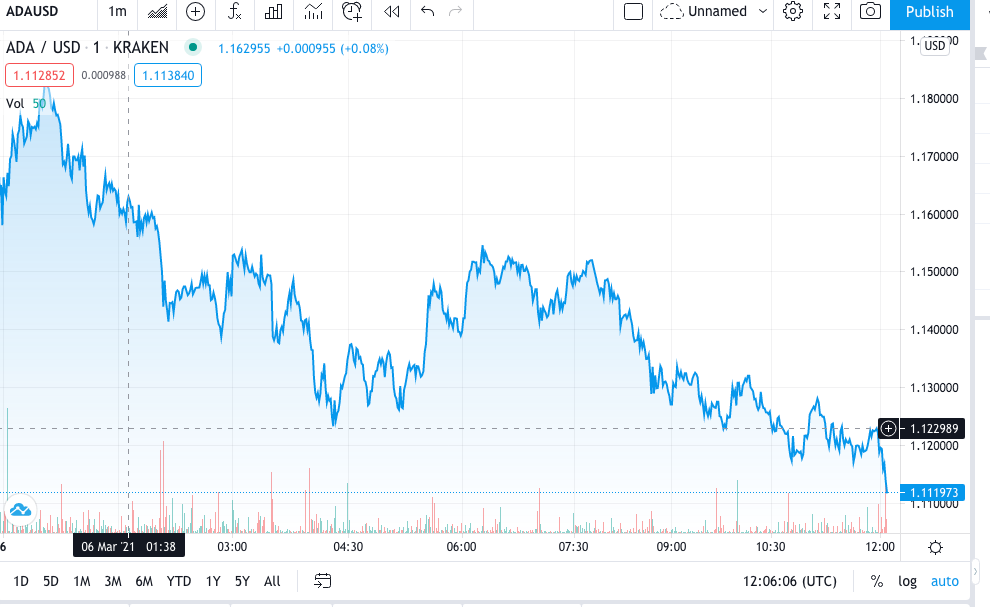 It is worth noting that the TD sequence indicator is present on the 4 hour chart. Hence the possibility of higher demand; which will drive the price of ADA higher. There is a decreasing channel on the 4 hour chart with Cardano (ADA) showing a percentage change of 0.44. The price fell from $ 1.14 to $ 1.12. A position the coin seems to be stuck in for the past few hours. An upward correction was rejected by a resistance barrier between $ 1.08 and $ 1.26. Traders should be aware of this price range as a slight dip could lead to further declines.

The bulls have the most hopes for a couple of levels of support in the event of a downturn. Such support is in the area of ​​the Fibonacci retracement level at 0.382 of the upside correction from $ 0.43 to $ 1.48 (the $ 1.08 support). The bears are less likely to break under this support. In the event of a decline, ADA has further support along the 20-day Exponential Moving Average (EMA) at $ 1.06.

How do you assess the price direction of Cardano (ADA)? Will the coin break above the $ 1.32 resistance level?

Even when Ripple beats the charges, XRP is not well worth the danger

Crypto traits in 2021 with business specialists

Ethereum Worth At the moment – three Causes…